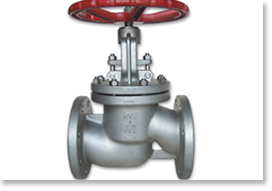 A globe valve is a type of valve used for regulating flow in a pipeline, consisting of a movable disk-type element and a stationary ring seat in a generally spherical body. Globe valves are named for their spherical body shape with the two halves of the body being separated by an internal baffle. This has an opening that forms a seat onto which a movable plug can be screwed in to close (or shut) the valve. The plug is also called a disc or disk.

In globe valves, the plug is connected to a stem which is operated by screw action in manual valves. Typically, automated valves use sliding stems. Automated globe valves have a smooth stem rather than threaded and are opened and closed by an actuator assembly. When a globe valve is manually operated, the stem is turned by a hand wheel. Although globe valves in the past had the spherical bodies which gave them their name, many modern globe valves do not have much of a spherical shape. However, the term globe valve is still often used for valves that have such an internal mechanism.

In plumbing, valves with such a mechanism are also often called stop valves since they don't have the global appearance, but the term stop valve may refer to valves which are used to stop flow even when they have other mechanisms or designs. Globe valves are used for applications requiring throttling and frequent operation. For example, globe valves or valves with a similar mechanism may be used as sampling valves, which are normally shut except when liquid samples are being taken. Since the baffle restricts flow, they're not recommended where full, unobstructed flow is required.

We offer a comprehensive range of Globe Valves that is widely demanded in several small scales to large scale processing industries. We manufacture these Globe Valves using qualitative grade of raw material that is soured from our most reliable vendors. We export these Globe Valves in various countries across the globe.